by Rodolfo Queiroz April 17, 2019 Outdoor Advertising, Billboards No comments yet
table of content

In the 2002 movie “Minority Report,” computerized billboards serve up personalized advertising to the people who walk past. A rotating crop of ads pop up in Tom Cruise’s peripheral vision, calling out the names of the people they are targeting. Women see boards hawking perfume and toiletries, while men are targeted by Guinness and Lexus.

At the time, people laughed off the depictions in the movie, set in 2054, as pure science fiction. But maybe director Steven Spielberg wasn’t thinking ambitiously enough.

Here it is 2019, and a startup in Europe plans to roll out billboard technology it says is based on the movie’s concept of serving individualized ads to different people.

While the billboards don’t reflect nearly the depth of knowledge about their subjects as those in “Minority Report” (which even knew how long people had held a certain credit card), they can tailor ads using facial recognition, changing the billboard display based on characteristics like gender and age.

Yes, the future is coming fast in out of home. Though you can’t expect a billboard to identify you by name anytime soon, you can expect a lot of other changes over the next few decades. Here are five things billboards will be able to do in the future.

1. React to Things Around Them

Already many billboards are outfitted with cameras and antennae that help them identify their surroundings and pick up on small changes in the immediate vicinity. For instance, a Swedish billboard showed a man who began coughing whenever someone who was smoking a cigarette came near. Sufficiently shamed, the smoker was then shown ads for anti-smoking products to help kick the habit.

This is a small-scale version of what you’ll see in the future. Sensors will inform billboards about more than just the weather or nearby smoke. Billboards will be programmed to interact vs. just react. They will draw people into a conversation about their smoking instead of just pointing out a lit cigarette.

The benefit: The more personal your interaction with an ad, the more likely you are to try the product.

Again, we’ve entered the early stage of this phenomenon—Clear Channel’s Radar programtracks anonymous data to measure the impact of out of home advertising and assist clients with better targeting.

But in the future, your smartphone will give billboards the key to increased relevancy. They will scan your apps and social media interactions to instantaneously ascertain your interests and your demographic data. These will offer insights into what types of ads should be shown to you.

Now, it won’t quite be like “Minority Report”—there are simply too many people whizzing past to single one person out for an ad. But billboards will read collective data to determine, hey, 60 percent of those passing by right now own cats, so here comes the cat litter ad.

The benefit: You get ads for something you actually may be interested in buying, instead of serving up dog food ads to all the cat people.

AR is here, but it will get even bigger and badder in the future. The real value of AR is that billboards aren’t limited to billboards.

Any surface becomes a place where you can deliver advertising. That opens up loads of real estate for savvy vendors and creative agencies. It makes advertising all but inescapable. Luckily, it also makes it fun, so people won’t be too annoyed that ads have arisen where there previously were none.

By using screens and video equipment, AR creates scenes you do not expect. For instance, a campaign in London used one wall of a bus shelter to house a screen where unbelievable things appeared to be happening on the street, such as a giant octopus grabbing a passerby and a woman descending from the sky while holding a bunch of balloons.

Future AR will be even bigger. People won’t just see these scenes before them; the billboards will immerse them, so they feel as though the experience is happening around them.

The benefit: These campaigns will be limited only by imagination—and agency people have some pretty amazing imaginations, which will get people talking on social media (or whatever format we use for communication and meme sharing in the future).

Does this surprise you? With all the talk of technology and big data and interactivity, you might expect that the billboards of the future will all be high-tech. But the reality is that static billboards remain effective and essential to outdoor advertising. Just a few of their attractive attributes include:

The benefit: There’s always something to be said for a classic.

5. Integrate More Seamlessly Into Their Surroundings

You almost always can tell what’s a billboard and what isn’t. While native advertising became popular on the internet a few years ago, blurring the line between ads and editorial, you don’t see that same opportunity with out of home, at least not up until now. 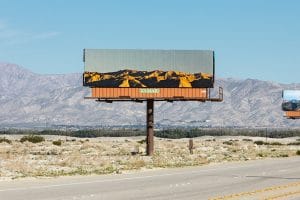 There’s a movement afoot to make billboards more artistic. To help them blend into the landscape more and become less obviously an ad.

Think sculptures that tell a story while also advertising something or ads that run in places you don’t traditionally associate with advertising, such as the entrance to a park. Anything can become a billboard, really, when you try hard enough. Subtlety can pay off in a world where ads often feel as though they’re bonking us on the head.

Seventeen years is an eternity in the advertising industry, so little wonder that so much has changed since “Minority Report” came up with what then seemed outlandishly ahead-of-its-time tech. We’re not laughing now, but certainly we’re eager to see what’s to come.

A Full Guide to the Dimensions for Social Media