by Gino Sesto April 29, 2017 Outdoor Advertising No comments yet
table of content

When a big record release is planned, wild posting is a powerful way to get the word out, especially in major urban centers. So if you’re pushing a political message why not take advantage of the power of wild posting to reach urban audiences and provide potent content for related media efforts?

Two recent campaigns illustrate how Dash Two helped organizations spread the word and cut through the noise on mass media and social networks. Though both groups shared political perspectives they used tactics that are applicable across the political spectrum. And both took advantage of the ability to pinpoint location with outdoor advertising. 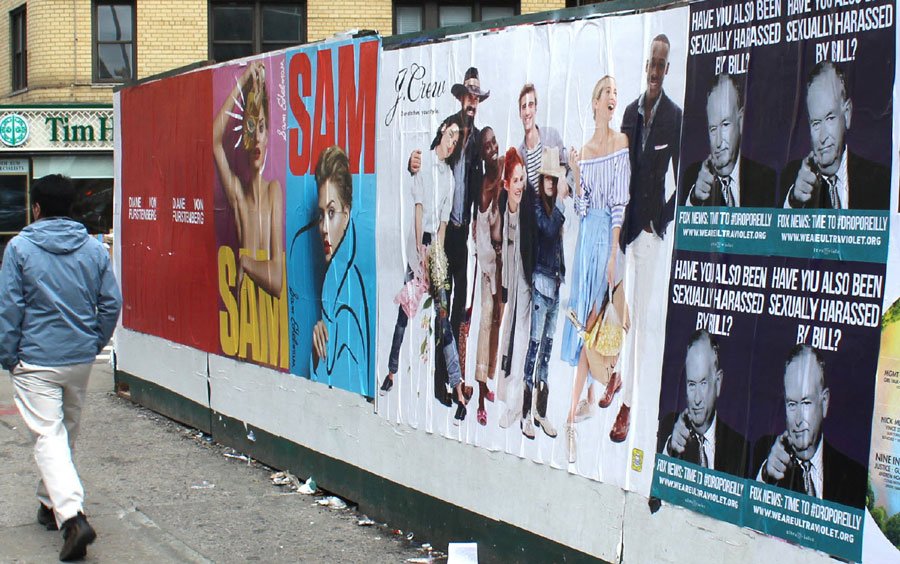 UltraViolet, a women’s advocacy group, organized a quick strike demonstration at Fox News HQ in New York in mid-April to push for the firing of Bill O’Reilly. This was an opportunistic action that focused on accusations that Bill O’Reilly sexually harassed Fox News employees.

The campaign included an online ad, a plane flying a related banner and a poster with a photo of Bill O’Reilly pointing at the viewer that asked, “Have You Also Been Sexually Harassed By Bill?”

Dash Two managed the wild posting campaign with a focus on locations surrounding Fox News HQ. Though the campaign was limited in scope the event received coverage in such news outlets as Business Insider, which described the poster, and The Wrap, which ran an image of the poster.

But photographs of the posters in the wild show the real strength of wild posting. They produced a sense of immediacy that extended the message of the protest into a larger zone in a major media center. Social media further amplified the message and supported the online ad campaign. 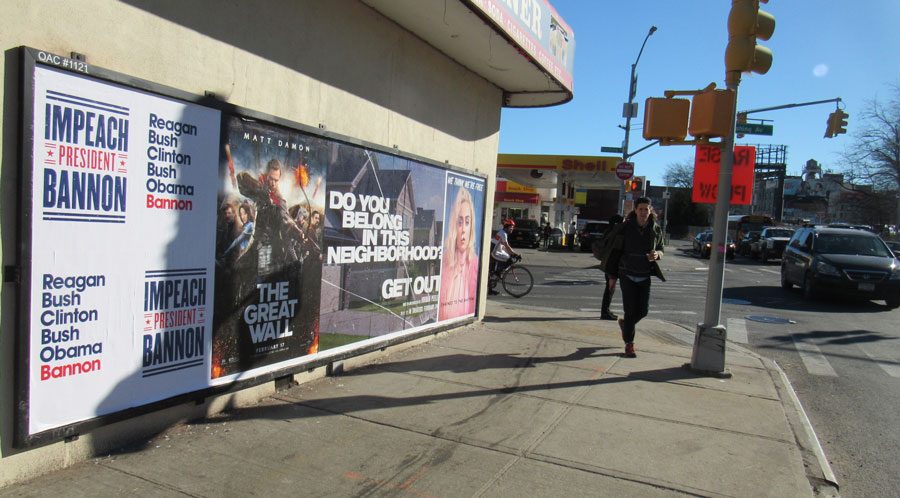 The ad hoc group, identified more by their cause than by institutional identity, crowdfunded the wild posting effort through Go Fund Me. Though that page is no longer available it can be seen via the Wayback Machine.

In contrast to the Fire Bill O’Reilly campaign which targeted a very specific area in New York City, the Impeach President Bannon campaign appeared widely. Nevertheless, as with other forms of outdoor advertising, Dash Two was able to provide specific locations that the group then shared with supporters.

These locations became part of news coverage with the San Francisco locations, for example, appearing in local coverage.  In addition to sympathetic coverage on such sites as The Hill, coverage featuring the posters also appeared in oppositional media such as IOTW Report.

In addition to numerous street locations and related media coverage, photos of posters in the wild appeared on social media accounts. Crystal Sacca, who describes herself as the “better half” to famed tech investor Chris Sacca, helped spread the news on Twitter.

Both campaigns benefited from wild posting’s guerilla vibe and the ability to pinpoint posting locations. This combination is one of the paradoxes of wild posting which has become domesticated over the years. Though wild posting still communicates the realness of the streets, at the same time it’s a self-regulated industry with legal posting locations and agreed upon rules of operation.

So when communicating a strong and even controversial message, wild posting is an excellent way to bypass the typical defenses of the viewing audience. In addition wild posting lends a uniqueness to such campaigns that encourages both mass media and social media response.

How to Reach Millennial Superfans with Outdoor Advertising