by Gino Sesto August 7, 2018 Outdoor Advertising No comments yet
table of content

Rock ‘N Roll, Art ‘N Advertising: Take a Look at the Coolest Billboards on the Strip

There has always been a unique relationship between rock ‘n roll and advertising. Rock musicians have a reputation for aloofness from the commercial world, suggesting they don’t need advertising to sell albums.

Of course, that is not true — everyone needs advertising, whether they’re the Beatles or the VW Beetle. But to preserve their cool image, musicians over the years have turned to ad campaigns with an air of mystery. Many of these campaigns focus on out of home elements.

Instead of relying on the obvious method of advertising an album by name, they use a more reserved approach, showing an album cover without any words or a lyric from a song. Fans of the group recognize the advertisements as such, while others just see a cool picture or lyric that requires a little legwork to understand fully.

This tradition goes back to the 1960s and ‘70s, to the heyday of out-of-home advertising on the Sunset Strip, when the biggest music groups in existence, like the Who and Led Zeppelin, held court on hand-painted billboards bought by their record labels.

Robert Landau was a teenager living a block from the Strip when these billboards began popping up. He vividly remembers seeing artists on scaffolding painting a 15-foot version of John Lennon’s face. An avid rock ‘n roll fan, Landau grabbed a camera and began documenting these epic billboards.

Fast-forward a few decades, and Landau is now an accomplished photographer who has published five books. He unexpectedly discovered the photos his 15-year-old self had taken of these Sunset Strip billboards, reawakening his curiosity about this period.

Landau began tracing the history of these billboards, eventually publishing a book, “Rock ‘N Roll Billboards of the Sunset Strip,” and recently posting an exhibit through the City of West Hollywood’s Arts Division that includes the photos he took as a teen. 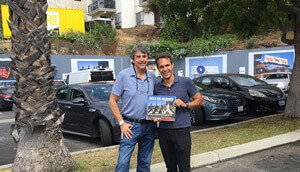 Landau recently chatted with DASH TWO about the genesis for his book, the concept of advertising as art, and why billboards presented the perfect medium for these ad campaigns. Here are some excerpts from our conversation, accompanied by photos that our founder, Gino Sesto, took of Landau and his exhibit.

DASH TWO: What made you shoot these billboards back then?

LANDAU: I really wasn’t thinking about making art or anything. I thought, “These are cool, let me grab a picture.” I made slide shows and invited friends over because not only could other people in other parts of the country not see them, but other people in parts of L.A. never saw these fantastic billboards either, and they were quite artistic.

They were strictly visual, no copy, just Pink Floyd or the Beatles. They just put up a striking graphic image. It became like a drive-through art gallery. Forty years later, I came upon the pictures in a notebook and only then realized what an exciting period that had been, what an unusual period it had been.

DASH TWO: Do you consider these billboards art? 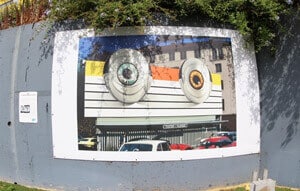 LANDAU: Absolutely. Someone smarter than myself once said anything can be art if an artist does it with concept and intent. Henri de Toulouse-Lautrec made posters to advertise a dance hall, and that is art. Andy Warhol painted Campbell’s Soup cans. It’s all about the intention and the cultural meaning behind it, so I definitely consider these billboards pieces of art. The concept reflects our culture.

DASH TWO: Were they actually drawn by artists?

LANDAU: I talked to a lot of painters [who worked on the billboards], and they were just reproducing as best they could the artwork supplied by the record company or art director. They conceived the image from the cover of the album.

So, for example, the Beatles walking across the street on “Abbey Road,” the idea came from Capitol Records not to add any copy, no words [to the billboard]. They knew the Beatles did not need any explanation. On the billboard, their heads were extended above the upper frame, meaning the artists cut out some plywood pieces and painted those. It really was a collaborative art form with the band or art director, figuring out how to translate it into a large horizontal shape.

DASH TWO: Does a music campaign need to be “cool”

i.e., these billboards are seen as cool and mysterious, is that a necessity for music advertising?

LANDAU: I think the people in the know, who know what’s going on, it makes them feel special. I’m a big Pink Floyd fan. Their album “Animals,” an image of that went up on Sunset Strip, and it looked like a children’s book illustration — no copy, no words. I’d say the majority of people had no idea what it was, but Pink Floyd fans knew immediately because they had the album.

It’s like being a member of an elite group or club, being on the inside. Also, for people who don’t know what it is, it makes them want to find out. Even though it’s not a hard sell, it’s a very soft sell, a part of it is a building of momentum and buzz.

DASH TWO: Can advertising be art?

LANDAU: Absolutely. I don’t think the intention is to convert people — the period when I was taking these pictures, the late ‘60s and ‘70s, that generation of Baby Boomers was distinctly anti-commercial. We were alert to people trying to sell us stuff, and our reaction to that, to anything slick and over-commercialized, was to immediately discard and not accept it.

A lot of bands refused to have their songs in commercials. That may have changed later on, but you never heard a Beatles song to sell a Chevrolet. They didn’t overcommercialize things back then, which is why the billboards were a safe way to do it, on Sunset Strip, speaking to a select crowd who was into music and entertainment

DASH TWO: What’s something fun you learned about these billboards while researching your book?

LANDAU: Years ago, Bruce Springsteen was in town and excited to see the billboard with his picture, it meant a lot to him. Well, he visited it, and he didn’t like the way his face looked. He got up on the billboard and he graffiti’d it. He talked about it at his concert that night. He said, “They made my nose look too big!” He wrote “Prove It All Night” on the board.

It wasn’t your standard graffiti, but it was interacting with the billboards.

Robert Landau’s book, Rock ‘N Roll Billboards of the Sunset Strip, was published in 2013 by Angel City Press and is available from Amazon. A New York Times review called Landau’s work “extensive, well researched and full of respectful awe for the largely anonymous creators” of the billboards. Landau is currently working on a documentary about this era.

Advertise Music Online? This Is Why You Need To Be On Instagram