The relatively new Facebook promoted video ad is a more intuitive and better-designed way to reach Facebook audience with beautiful, high-quality multi-media ads, instead of simply embedding a YouTube video in a promoted post. There are several reasons why running a Facebook Video Ads campaign might be a reasonable alternative for advertisers looking to reach a certain pool of audience now and in the near future, compared to regular YouTube Video Ad campaigns.

Here’s how it works: Facebook allows you to run any video spot as a promoted video post with a call-to-action appearing at the end of the video and an embedded click-through URL to take viewers to your chosen storefront or website. The video ad will start playing without sound on targeted audience’s newsfeed screen and stop once they scroll past. If the viewer taps on the video, it will expand into full screen and play with sound. As any other regular Facebook video post, these ads are designed to look and feel organic and nonintrusive to the viewers’ home screen.

Essentially, you don’t need much to start running these ads, and they are amazingly affordable since you only pay per view (which basically means impressions). Our average cost per view for Facebook Video Ads has been between $0.03 and $0.10 cents, which really stretches your advertising dollar at the end of the day. In addition, we can also create lists of people who have viewed your videos and then re-target these pools of audience in the near future. So keep in mind that these premium video ads come with the option to incorporate retargeting into your future campaigns and the call-to-action button at the end of the video, all while offering you the ability to target people based on interests, associations, demographic, etc… That said, Facebook Video Ads definitely allow you to reach an audience who might not frequent YouTube regularly but still are ideal consumers of your multi-media content.

Tired of their users posting Instagram, YouTube, and Facebook video links in their Tweets, Twitter has rolled out Promoted Video Card which streamlines video playback on users’ timelines. The benefit of running a native Twitter video ad is that your video will expand and play with just one tap, allowing for better engagements and more views from targeted users.

Similar to Facebook Premium Video Ads, you can easily upload a high-quality video (no length restriction) to run as a Twitter Promoted Video and choose to pay per view (you get charged when a user choose to tap and play the video). Twitter also offers video analytics featuring completion percentage and organic vs. paid video views (similar to what YouTube Video Ads offer).

Since Twitter is a better platform for branding, if you are looking to get the most impressions and a quick buzz for your videos, this might be the right option for you. However, it will not be comparable to running ads to generate clicks. Twitter Promoted Video Ads are great to achieve the viral factor and will serve well if your goal is to get as many video views/impressions as possible. 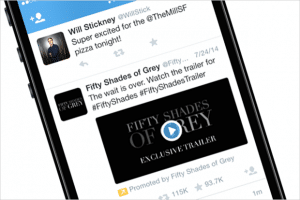 Kim M. Pham is a professional Digital Media Strategist based out of Los Angeles, CA currently working at DASH TWO. Kim has worked closely with clients primarily in the music space on campaigns for some of the world’s biggest country artists, including George Strait, Luke Bryan and Shania Twain. Being on the agency side, Kim works with clients to develop media plans that reach intended audiences and support their respective business objectives. She is responsible for the development and management of digital strategy for client brands.