You want to know what the Next Big Thing is going to be in advertising? Follow the money. Right now, tons of money is flowing to the cannabis industry — and marketing dollars are right behind. The majority of states now allow pot for recreational or medical usage, with initiatives on the ballot or in the legislature for several other states to join them.

So just how big does legalized weed have the potential to become? Mind-bogglingly large. One recent report even had annual sales of marijuana rising to $130 billion worldwide1 within a few years. To put that in perspective, that’s more than the soda industry and rivaling alcohol.

Even if cannabis sales don’t reach quite those heights, more conservative estimates still put it at $50 billion to $75 billion2 within the next decade, with a crazy compound annual growth rate of almost 27 percent3.

Big business is competitive business, and that means advertising will ramp up quickly to grab a greater share of this growing industry. We’ve compiled 60 fascinating cannabis marketing stats to underscore that potential. (How do you know there are 60? Look at the superscripts.)

Cannabis Marketing Growth: How Big Is It, How Big Will It Be?

DASH TWO tracks data related to pot advertising, and we’ve come up with some pretty telling numbers. Here’s a breakdown of total dollars across B-to-B spending, TV, print, internet, radio and outdoor over the past two years and year-to-date this year:

Spending will double this year, we believe, and it will get even bigger as we iron out the legalities of cannabis advertising — the fact that it’s still considered a Schedule 1 drug by the federal government means advertising in certain municipalities and states faces intense scrutiny.

Advertising probably won’t double every year. But it will grow very quickly, especially as legal hurdles relax. This happens with most innovations. For instance, when digital billboards first came out more than a decade ago, many advertisers were reticent to get on board, worrying about the safety of this new ad format.

But things changed quickly. Digital out of home now represents nearly a third of total OOH spending, with more than half of Americans saying they’ve seen a digital billboard in the past month.

Takeaway: It doesn’t take long for advertising to grow with demand, and cannabis is set to soar. 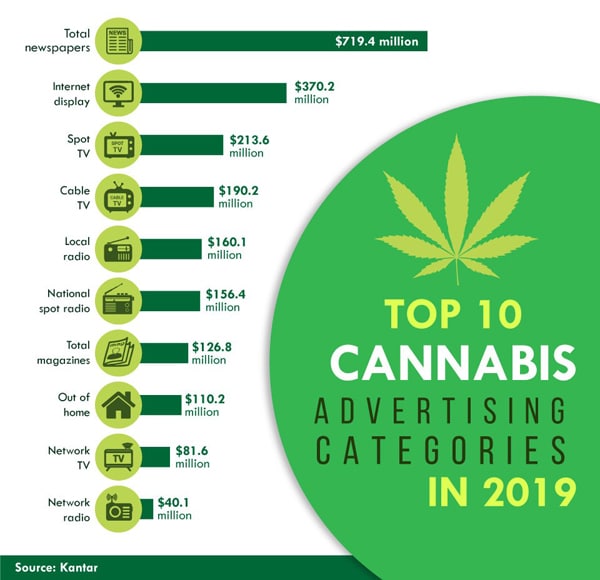 What Advertising Formats Are Most Popular for Weed?

It’s not just a matter of how big the dollars will get—it’s also a matter of where they go. Where do marketers think they have the best chance of reaching potential buyers? Who do they see as their most likely customers? These perceptions will guide investment as the years go on.

Here out of home has a big advantage, because unlike several other media, it has fewer restrictions. Facebook and Google, for instance, the two biggest digital media advertising platforms, don’t accept cannabis advertising. You can still find digital opportunities with workarounds like event advertising, but that’s a pretty significant loss.

Here’s how the categories of media break down, according to our numbers (all 2019 figures are projections).

Out of Home Cannabis Advertising

Takeaway: With fewer regulatory hurdles, outdoor stands to benefit from this form of advertising. It saw amazing growth from 2018 to 2019, and you can expect it to rise even faster in 2020 and beyond.

Takeaway: A lot of dispensaries and other businesses are interested in targeting Hispanics, and while newspapers may be losing money in other advertising categories, marijuana could provide a nice salve to those wounds. Alternative papers especially can benefit from this new income category. Overall, newspapers have the largest investment in cannabis advertising.

Takeaway: As dispensaries and other weed-related business become more established, they will have more need for B-to-B spending.

Takeaway: Cable offers a way to reach a niche audience, and that’s what weed remains, despite its growth. Still, spending in this category won’t grow as quickly as for other media, which also reflects streaming’s impact on cable viewership and overall reach.

Takeaway: Like newspapers, magazine advertising has been on the decline for years, and so the medium may eagerly embrace any opportunity to increase spending. Local magazines could provide a better fit as often their distribution is contained to a small area within a state, which negates concerns about the cross-border legality of marijuana in different states.

Takeaway: Airwaves are more tightly regulated than outdoor or internet advertising — and so it may take longer for this category to ramp up to its full potential. Expect legal challenges that could pave the way for more widespread advertising.

Takeaway: Like radio, TV faces a lot of challenges with nationally available programming. While it has potential, its greater growth is likely well down the road.

Want to learn more about cannabis advertising? Get in touch with DASH TWO to discuss your options.