California legalized recreational usage of marijuana on Jan. 1, 2018. It’s no exaggeration to say that since then, dispensaries and other pot-related businesses have put up billboards extremely fast, displaying the sort of focus and discipline you don’t usually associate with stoners.

We kid, of course. While you can make lots of jokes about potheads, the truth is marijuana is a billion-dollar business, and there’s a lot of money to be made as CBD oil and other forms of legalized pot make their way into the mainstream.

We can’t drive to work without encountering at least a few weed billboards, and there seem to be more of them every day. These boards pop up in high- and low-traffic locations, and they’re saturating California.

And they will slowly make their way across the country as marijuana advertising regulations take shape, though right now we’re still feeling our way around this. Most states have some type of restriction on advertising, such as what imagery or words can be displayed. Some states ban weed advertising outright, citing federal law that continues to classify marijuana as a Schedule I controlled substance.

Over the years, those regulations will likely soften and we’ll see more outrageous, in-your face billboards. But for now, most of the examples we’re seeing take a fairly conservative approach. The idea seems to be that the product is controversial enough — there’s no use risking alienating people with outlandish creative. Fly under the radar, for now.

Our staff has snapped pictures of more than a dozen marijuana billboards across Los Angeles to give a picture of what types of ads are being put up in this first wave of weed advertising. We’re sharing them so you can see the angle people are taking and maybe get some inspiration for what you want your billboard to look like (or not). 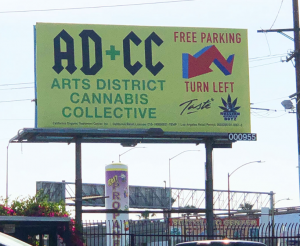 This billboard marries information with practical assistance. The big arrow draws people’s attention to a rare luxury in our urban environment — free parking. That’s enough right there to sell people on a product.

The rest of the sign is straightforward. The graphic in the right corner makes it clear what the sign is advertising, showing the universal symbol for cannabis leaves. The left side notes the collective’s name 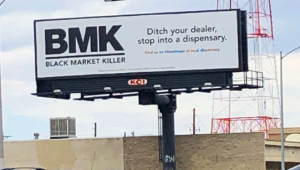 The very concept of “Black Market Killer” is amusing. It’s a legit operation looking to funnel business away from street dealers and into its dispensary. Kudos for honesty and, ahem, bluntness — people are, indeed, looking for ways to move away from marijuana’s illegal street roots and seeking out new ways to buy as the produce gets a more polished image. 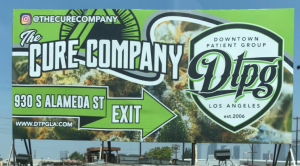 There are plenty of marijuana companies looking to play on the idea of the herb as medicine. That’s the focus of the Cure Company brand, which wants to be seen as a medical necessity for patients looking for marijuana. The bold green color and big letters draw attention, though the imagery is a little difficult see. 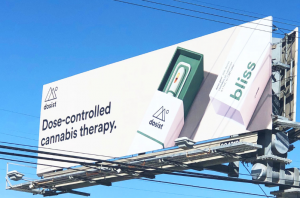 Again, we see another company setting itself up as a medical option, focused on the “therapy” aspect of cannabis. The board illustrates the product, which looks like a medical device, a notable effort to destigmatize the use of pot for medical reasons. Dosist promises “dose-controlled” therapy, which will pique the interest of those who don’t yet use cannabis but are curious about its effects. 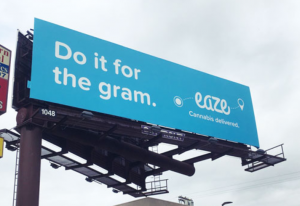 If you don’t get this reference, then you’re not in Eaze’s target audience, and the cannabis delivery service probably doesn’t want to reach you. If you must know, “Do it for the gram” refers to doing something cool so you can post a photo of yourself doing it on Instagram.

Is getting cannabis delivered to your home gram-worthy? That may be debatable, but Eaze proves it’s comfortable with youth culture by pulling out the well-worn phrase. And the little social media icon of your spot and the delivery route is fun. 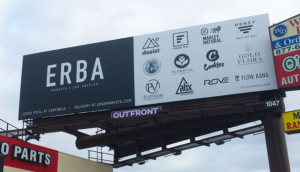 Simple and sophisticated works for brands like Tommy Hilfiger. Erba, a Los Angeles-area pot dispensary, took a page from that playbook by keeping its presentation clean for this billboard, which highlights all the brands Erba carries as well. 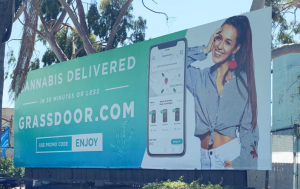 We could probably spend one very long post writing about how cannabis companies come up with their names. Grassdoor offers cannabis delivery (get it?). Putting an attractive woman showing off her abs on the billboard does not relate to that service at all, but it’s a classic advertising tactic to grab attention and probably works. This fresh-faced young woman also looks nothing like the stoner stereotypes we mentioned earlier … which is definitely intentional. 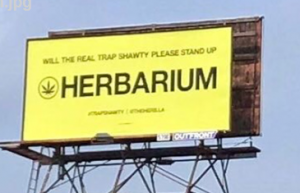 Here we see another instance of melding Gen Z slang (“trap shawty”) with advertising, and this also features a throwback to the Eminem song “The Real Slim Shady.” It doesn’t tell you much about Herbarium or what it offers, though, aside from the little marijuana symbol. Since this sits atop a building and it’s kinda hard to see at long range, maybe that’s enough. 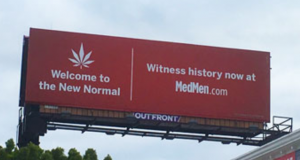 This billboard sets an exciting tone. It invites you to “witness history” and plays on the theme of a new day dawning for marijuana users. That positions the company as visionary and pioneering — two things most companies like being associated with no matter what they sell. 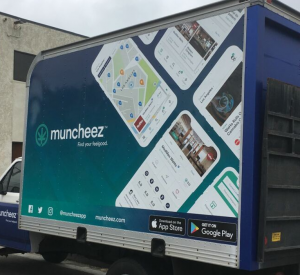 Muncheez has a cute name, for sure — this app lets you find cannabis delivery in your area. The company chose a mobile billboard to advertise, a good way to target multiple parts of the city with drive-throughs. The messaging is simple but appealing, giving the viewer a first-glance understanding of the app’s capabilities.

“Think higher” makes a fun play on words: getting high, of course, but also a higher class of delivery. Nugg Club aims for a more sophisticated cannabis delivery crowd with this simple billboard. 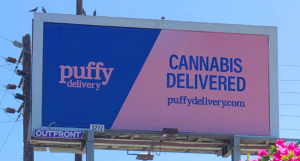 There are so many cannabis delivery services in LA, it’s tough to stand out. This one doesn’t make any promises or really deliver much branding, though the unexpected color combination does catch the eye. Very few pot billboards embrace light pink.

Pot strains have such fun and catchy names. Why not put them on a billboard and make that the amusing gist of the billboard. It works for Select Better, which highlights different names in playful phrases urging people to buy its pot. 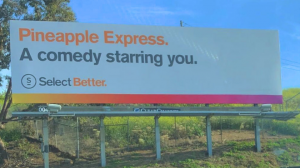 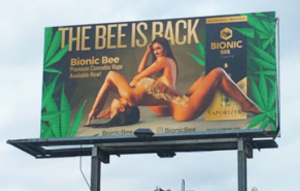 Sex sells. No further analysis needed for this billboard for an organic cannabis vaporizer. 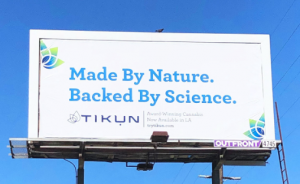 The uncomplicated, impactful phrasing on Tikun’s billboard gets to a recurring theme among pot evangelists — it’s all-natural, so it must be good for you. Plus, research! The rest of the billboard doesn’t distract from the theme.

Is that—? Yep, that is the back of Mike Tyson’s head, advertising the cannabis made by his very own company. That storyline/distinctive head are definitely bizarre enough to stand for themselves in the creative. You are probably loading the page for Tyson Ranch right now, aren’t you?

Undoubtedly pot billboard ads will evolve well beyond these early examples, featuring better creative and more fully formed ideas. For now, simplicity and a little sass are in. We’ll show you whatever comes next — or, if you’re ready to put up your own marijuana billboard, get in touch with us to learn more.