by Rodolfo Queiroz December 10, 2020 Outdoor Advertising No comments yet
table of content

Grabbing attention is the name of the game in advertising. Posting something that people can’t help but look at is the first step to running a successful campaign. And when an ad looks more like a piece of artwork than a big “buy me” sign, you know you have a winner.

That’s why so many advertisers are drawn to mural advertising. It offers a way to capture the essence of the brand in a creative, eye-catching way. These painted advertisements can be as effective as billboards, sometimes more so thanks to their potential for going viral. We’ve put together this guide to mural advertising to answer all your questions about the medium.

What Is Mural Advertising? 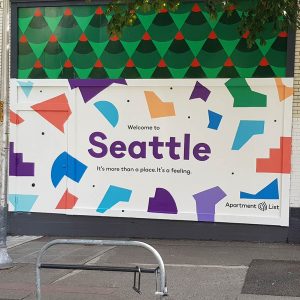 You can post advertising murals on any wall. They’re generally done in big cities in order to expose them to the largest possible audience, though this isn’t always true — you can also create hand-painted walls in smaller venues for an upcoming show (i.e., in one of the towns leading to Coachella).

How Do You Get Space for Mural Advertising?

The wall almost always belongs to a vendor or a business. Either may lease the space to advertisers. If a vendor owns it, the process will be easier, though you’ll pay for that convenience. If a business owns the space, you’ll need the landlord’s approval and may need to secure inventory permits.

Those who choose not to use a vendor can scout out locations, which may take days, and even then, it’s not guaranteed that the owner will want to lease the space. At least with a vendor, you know the space is used regularly for advertising.

What Ad Categories Use Mural Advertising?

You can find hand-painted walls from some of the biggest companies in the world, ranging from adidas to Netflix to Givenchy to Chanel. It can be effective for virtually any industry.

How Much Does Mural Advertising Cost?

Mural painting costs about $15,000 to $25,000. The pricing varies based on many of the usual out-of-home media variables, such as: 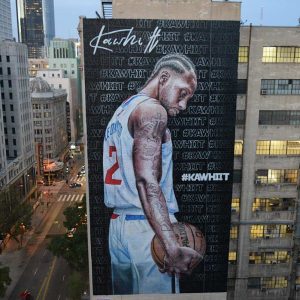 A huge wall mural may run up to $45,000 to $50,000. In Los Angeles, the most in-demand locations include those along West Hollywood and Sunset Boulevard, which can double the asking price of something in East Los Angeles. Pricing may be higher in New York City, where costs are higher in general for advertising.

Mural advertising is similar to wild posting, in that there are many ways to do it right, but if you don’t know the regulations or try to do it right, then you could violate the law. Having an agency work with you that knows the guidelines is one way to avoid this issue.

The most important thing is securing the landlord’s approval. Make sure you get the okay in writing and have an agreement on sizing of the mural.

You should also determine local regulations. Los Angeles, for instance, makes art and advertising distinctions between murals that contain more than 3 percent text and those that do not, even though the latter may be a huge rendering of a logo.

Who Paints the Murals for Advertising?

Street artists create the majority of paintings for vendors. Sometimes an advertiser wants a specific artist to paint the mural, perhaps someone they follow on Instagram who has a unique style. The painting begins with a base coat, then the artist paints more details in the next phases.

How Long Does it Take to Paint a Mural? 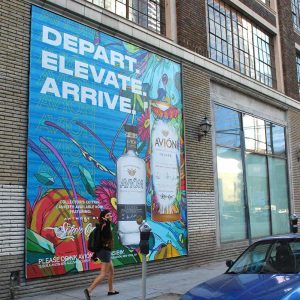 A project can usually be finished within a week. Most take three to five days, depending on the complexity of the mural. Sometimes two painters work on it, so the painting takes less time. One painter may handle the left side and the other takes the right, or the painters may split the wall top and bottom.

What Size Are Advertising Murals?

The size varies from project to project, as wall sizes are different. A standard size may range from 10 feet x 20 feet to 10×15 to 15×14, but we’ve seen them as big as 56 feet high. The bigger the space, the more you will have to pay.

How Long Do Mural Advertisements Last?

Most are leased for four weeks, like any standard outdoor media space. Others may be left up for three months or even longer — some businesses allow murals to stay forever, using them as branding or memorials.

Instagram and Mural Advertising: A Match Made for Clicks 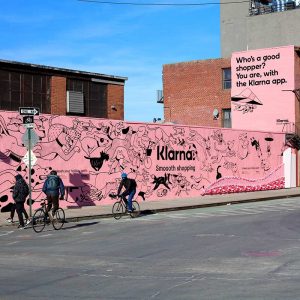 We’ve definitely seen a rise in demand for this form of advertising over the past few years. If you can trace the recent renaissance for mural advertising to anything, it may be the boom in Instagram users. Murals receive second lives when someone snaps a photo of them and posts it on Instagram. Clever, well-done advertisements or ones painted by a well-known artist often go viral, exposing the ad to way more people than would have seen it in person.

For instance, Kendall Jenner drew 7.9 million views on Instagram when she announced an adidas ambassadorship, and she did it in front of one of the company’s murals, giving it a huge amount of exposure.

Other Things to Keep in Mind When Using Mural Advertising

Here are a few other insider tips we’ve picked up when executing mural advertising for clients:

If you want a wall painting advertising agency, contact DASH TWO. We’ve executed murals for a range of clients —see examples for Klarna and Lady Gaga — and they’re always fun. Get in touch today to get started.